The 5Ps of Marketing Artificial Intelligence

“Can we automate content creation using artificial intelligence? More specifically, can we use machines to write blog posts at scale?”

These are the questions we sought to answer in spring 2015 when I launched an internal initiative named Project Copyscale at my content marketing agency, PR 20/20.

I’d had a growing fascination with artificial intelligence since IBM Watson won on Jeopardy!in 2011. I didn’t understand the underlying technology at the time, but when I read Automate This by Christopher Steiner in late 2012 I became convinced that artificial intelligence would transform marketing as we know it. It was only a matter of time.

“Some algorithms’ roots trace to the field of artificial intelligence. They may not be intelligent and self-aware like Hal 9000 (Heuristically programmed ALgorithmic computer), the machine from the movie 2001: A Space Odyssey (1968), but algorithms can evolve. They observe, experiment, and learn—all independently of their human creators. Using advanced computer science techniques such as machine learning and neural networking, algorithms can even create new and improved algorithms based on observed results.” — Christopher Steiner, Automated This (Penguin Group, 2012)

Read the rest here: The 5Ps of Marketing Artificial Intelligence 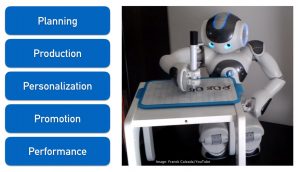