As long as human and artificial intelligence work in tandem, we’ll continue to make each other better at what we naturally do best. 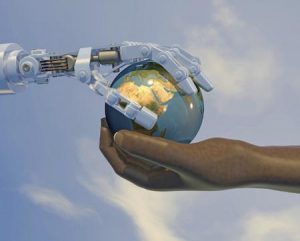 The topic of artificial intelligence has broken out of computer science labs and into boardrooms across industries, as recently noted in the Harvard Business Review: The buzz over AI has grown loud enough to penetrate the C-suites of organizations around the world, and for good reason. Investment in AI is growing and is increasingly coming from organizations outside the tech space. This news does not mean that Ultron will soon dominate the Fortune 500, but it does hint at the powerful new productivity paradigm that is reshaping enterprises.

What we broadly term “AI” (as opposed to traditional sequential computation) seeks to replicate the human mind’s ability to “think” — to understand the underlying context of decision making based on multiple simultaneous inputs. Such technologies are already transforming a number of important business processes. Witness the prevalence of chatbots, facial recognition applications, self-healing networks, or virtual assistants such as Siri or Alexa that “learn” from interactions.

This paradigm has nothing to do with the self-aware cyberbeings popular in sci-fi.  Instead, it’s deeply rooted in the quest to improve human capability. It is an “augmented intelligence” model defined by the positive-sum synergy between data-driven, technology-enabled analytics and human logic, business acumen, and intuitive contextual awareness.

This was originally published from: https://www.informationweek.com/big-data/ai-machine-learning/create-real-value-with-augmented-(not-artificial)-intelligence/a/d-id/1330131 on October 17, 2017 11:05 am